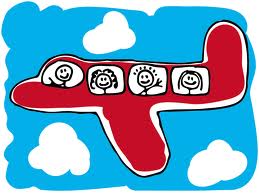 I’m riding in back of a speeding cab watching a public service announcement where the Mayor is telling me to wear a seat belt. I can barely hear the little TV because my Pakistani driver is yelling at an innocent cyclist he almost killed and who is now flipping him off.  I try to explain to him how uncomfortable I am with him looking back where we’ve been instead of where we’re going.  A garage truck makes a quick stop ahead of us. My driver slams on the breaks and we come to abrupt halt. I swear he never looked forward. My briefcase and I rocket forward and glue to the plexiglass separator until the our forward momentum dissipates.  I buckle my seat belt and he starts yelling at the garbage truck. I think about how fragile life is and wander back in my mind to another incident that happened to me three years before.
We were all  in the last ten minutes of an arduous 6 hours flight to see my wife’s cousin in San Francisco for Christmas.  On approach the plane got to about 800 feet and suddenly pulled up.  The flight steward got on the intercom and announced we would be circling around and taking another crack at it.  No real explanation was given and everybody who moments before had been complete strangers started chatting like were attending an aerial family reunion.  After two of these failed approaches we found ourselves circling the Pacific, very annoyed, when the captain came on the intercom and started his announcement by saying, “I need to be honest with you…”  While this is a perfectly acceptable opening for a couples counseling session, it is not the best way to address a captive audience of 144 people in a flying death trap.  I mean, for Christ sake, this was the same crowd that almost stormed the cockpit half way through the flight when we were told  the plane had run out of margarita mix. Anyway, he went on to say that the plane’s landing flaps weren’t working and that we needed to prepare the cabin for an emergency landing. This involved removing our personal effects and specifically dentures. Dentures I thought? Under what scenario would wearing dentures be a safely risk? I thought of a macabre commercial for Polident where a bunch of old people die in a horrific plane crash but all their dentures hold strong.  The captain then went on to said that emergency vehicles were standing by on the runway  because we would be coming in a “bit fast” on the landing and we might catch fire from the extreme breaking that would be required to stop the plane at high speed. He said that they had a procedure for ‘this’ type of emergency and that he was trained to handle the crisis.  I was thinking Apollo 13 and ‘Houston we have a problem’ and that if we’d gone to Houston to see my dad for Christmas, there would have been no problem. It was like a Die Hard movie and as I looked out the window on our final decent, the ground moving beneath us in a blur, I expected to see Bruce Willis hanging on to the wing, lifting the flaps up manually. My wife had seen a cryptic movie billboard on the way to the airport which read ‘4 dead’ and was trying her best not to take that on a symbolic level.  The cabin was a flurry of activity and confusion but in the middle of the panic something wonderful happened. People around us, mainly elderly women with dentures, starting tossing airline pillows to us from over the seats to help cushion the kids. It was one of those defining moments in the middle of a terrifying situation when people rise above their own fear and do something extraordinary. Then, only moments before landing there was a dead calm. I looked over our seats and saw nothing. The flight attendants were gone, strapped in their jump seats and every passenger was doubled over in the crash position. The plane look deserted as we all braced for impact. My wife looked at me and told me she loved me and I did the same. Thing 2 was only nine months old then and  got very calm in her mother’s arms.  Thing 1 was three and sobbed… well…like a three year old.  I proceeded to tighten her seat belt like I was securing a precious piece of art for overseas shipment.  We came in fast and extremely low as promised but in the end we rolled to a belated stop unscathed.  Everyone on the plane celebrated like it was new year’s eve in Times Square. We faced death and lived to tell the tale. It was one of those defining moments that eventually became part of our family’s legend. I remember walking off the plane I getting a sudden craving for a margarita…damn!.